Technology has opened the door to a new lifestyle, which includes a drastic change in the way we live, work and, of course, the way we learn.

One of the companies that has made a major impact on the way business is done today is Uber, a company that offers a private transportation service in different cities, all through a mobile phone application.

Currently Uber is valued at 62.5 million dollars and has given way to the beginning of the “uberization” era.

Uberización is a new term coined thanks to the phenomenon of this company and which has become very popular especially in the financial and business sphere, since it refers to companies that like Uber use temporary workers and outsiders.

How is uberization related to organizational learning?

At first it can be considered that the term is not related to organizational learning, but let us reason for a moment.

It is considered that uberization is a disruption of established business models, which has innovated the previous structural archetypes, thanks to the use of creativity and technological tools such as digital applications (Digital Transformation?).

In that sense when we talk about organizational learning through uberization we refer to that new form of informal learning that is being given thanks to the internet, and that has caused a break in previously established patterns of education.

Today we can all be self-taught just by going to the web and signing up for an online course, watching a tutorial on YouTube, or joining a specialized blog about our topic of interest. In the wake of this, Manuel Parra in a post wonders if he could get to give classes of surgery, having learned by Internet.

So with this context, who could think of continuing to design “courses” or learning actions as he had been doing so far? Should learning organizations be organized as they have so far? I think we are in time to take a step in the development towards more “uberized” organizations.

How should we translate Uber’s principles into organizational learning? How to uberize learning?

To begin, we approach the pillars of Digital Transformation, you know, big data, mobile and social in the sense of networks and communities.

My proposal to uberize organizational learning and L & D directions is based on 6 aspects: 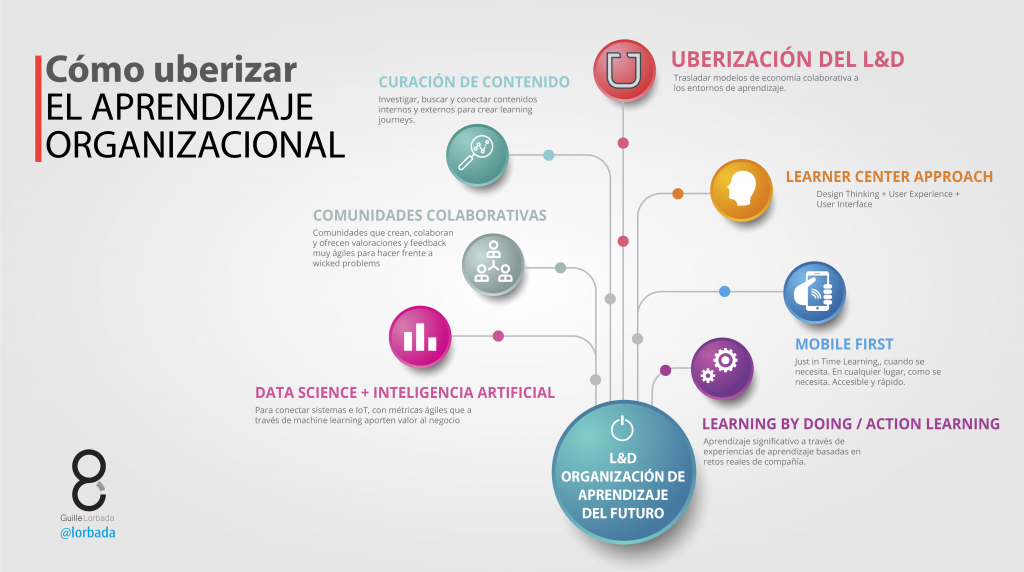 What has happened so far is that the learning actions are designed based on an analysis that the company or the business does, that a consultant translates to learning objectives and thus a course is designed without stopping or even wondering if the Receptors, students need (it could be the case that they already know, or that in their work is not applicable and would be only preventive knowledge or …).

I believe that the learning action designs have to be carried out from a student-centered perspective (Learning User Experience), putting them truly in the center and designing a complete learning experience at the intersection of the need of the company with the personal need And adapted to the context in which learning takes place (which can be multi-context, multi-channel, bidirectional, etc.)

Attention must be paid to three aspects of design that have not been taken into account so far:

Uber is mobile by nature. It does not appear in another scheme that is not mobile (although it is so adaptable that in any medium it seems native).

Designing from a mobile approach allows learning to be always accessible and sow instant, as well as multi channel.

Just as Uber allows us to follow the route of the car before we even ask for it and then during our use of it, learning must allow students to see their personalized “path” and their role in that path or Journey. At this point we will see what I proposed in the previous point, to go from designing a course that is worth for the whole organization (a critical and recurrent error, in my opinion), takes special relevance. L & D professionals must focus on consulting each student.

In many Spanish business organizations there is a tendency to think that the work environment is different from the environment of the person outside the work, with the consequent error of concept. In many cases, it happens that when entering the work, people “travel to the past” to have to use tools that are not current (for example, an office 2007, instead of 365, a departmental instead of a Dropbox, Etc.) Workers expect to have in their corporate tools the same experience they have in the rest of the world. The same with learning and this is also being able to choose what they want to learn, where and when. If Udemy or Coursera already do it, why not integrate it into organizational environments?

This pair is uniquely important. No more courses to know or to do. With this methodology you go to the heart of learning and what really matters is doing. That’s why it’s “Learning by doing” for real.

The first thing the user sees is a challenge posed through meaningful activities that reflect actual professional performance (what you are expected to do during work). That’s why Action Learning.

The key is to design the meaningful activity well, the content is secondary.

If there is content that can be learned by all parts of the Internet, why not use it right now?

L & D professionals must develop the skills of content curators to locate the best and most relevant content for the required student segment. And this part does not include creating content, it’s just seeing what’s outside, analyzing it and offering it. This task is not easy because it is not a question of agglutinating disconnected content, but you have to unite the points by creating a Learner Journey that makes sense, that connects and has meaning and value. Sometimes it will also have to re-design the found content to endow it with a common UX or an appropriate frame of reference. In this sense Harold Jarche proposes the model “Seel – Sense – Share”.

Uber is undoubtedly a community of people, each with its interests at the intersection of which there is a mutual and multilateral benefit based on collaboration. One of the pillars of business models of collaborative economy is precisely the opening of data, content generated by each user, crowd-sourcing, co-creation, collaboration, etc. With this framework out there and so close, it seems obvious that L & D organizations can not continue to think that all learning content can be created by themselves. Do we believe that L & D organizations can respond to the Wicked Problems that arise in every business? I do not think so.

It is the moment to give a special protagonism to the students as creators of the content and not only as consumers. Now that technology allows it and the future requires it, it is the moment to connect all the agents involved in the learning processes so that each one contributes, believes and shares. The role of L & D thus becomes an interface, a connector, a platform and a facilitator that all this happens, and occurring adding value to the company and the business.

In the second place, this community must develop its commitment through continuous feedback. Just as Uber users value the driver, their vehicle, the experience, the students must be able to quickly value the creator of content, content and experience. For what? To allow this feedback to generate continuous improvement in the system. Uber has made it possible for drivers to improve their skills or to fine-tune their vehicle because they need to win more customers. This open, transparent and bidirectional conversation that happens normally also in places like Amazon, Tripadvisor, etc. Is necessary in the learning, beyond “robust” systems of measurement of the satisfaction, transference or advantage of the learning.

Finally it is necessary to put the Big Data through Data Science, to the service of the personalization of the experience and the improvement of the same one. Not only connecting the learning systems, but using the Internet of Things (IoT) and company systems.

Now that technology allows, L & D must introduce artificial intelligence mechanisms to generate agile and valuable metrics to improve or discontinue learning actions, or detect new needs on the fly without the need for complex and bureaucratic processes. How? Through systems that learn alone with appropriate Machine Learning algorithms.

In conclusion, I think we are on the runway of learning organizations of the future. We are able to transform not only digitally but conceptually the way in which any action of learning is detected, designed, produced, imparted and measured. We are at the door of an agile model to learn just in time in the channel that you want, at the moment that is needed and with the contents that exist or we can create.

It is time for organizations to develop new skills that allow the emergence and spread of a new organizational learning framework that allows companies to be more efficient and more agile.

If you are interested in the subject, you can find these interesting sources: